It’s early afternoon at McCrite Plaza Briarcliff when Diane, the activities assistant, enters Jack Morgan’s apartment. “I have never seen so many pictures of steam engines in my life,” she says. Jacks favorite steam engine photograph hangs on the south wall above an antique secretary desk. Each image is identified by hues of brown and yellow, showing their age. Diane is certain that Jack’s love for the railroad and passion for trains has helped him feel at home, over his four-year residency at McCrite Plaza. He can look out his apartment window and watch the busy train traffic going in and out of the North Kansas City railroad yards and hear the train whistles at night. Plus it’s close to Line Creek Park where Jack was part of the group that built the park railroad over 20 years ago.
Jack Morgan grew up in Jackson County, Missouri, as one of three children, two girls and one boy. 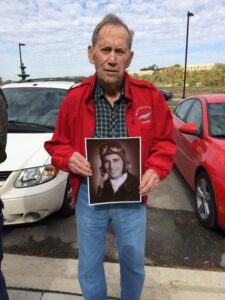 His dad worked for the Burlington Northern and step dad worked for the Union Pacific. His mom worked at Reeder’s Oyster House in downtown Kansas City which was owned by Jack’s uncle, Cyrus Harvey Reeder. During the Great Depression, Jack worked as a dish boy for Uncle Harvey. “I did whatever they told me to do,” he says, “Dishes, cleaning tables, wiping up spills.” His Aunt Gladys made the most delicious pies at the restaurant. Patrons claimed their slice of pie before ordering. Jack remembers peach pie, as his favorite.

While in high school Jack worked at Stroud’s Restaurant as a car hop. Stroud’s sat under the 12th Street Bridge, right where the steam engines would whistle. He found the train whistle therapeutic during his car hop days. When Jack finished high school, he joined the Army Air Corp and was trained as a mechanic but eventually became a Flying Sergeant. He said that by tradition, flight goggles were placed around a Fly Boy’s neck in training and certified pilots kept them on their head, just above the brow bone. It was while he was stationed in Florida, during World War II, that he met his future wife. He went out on the town with some of his Air Corp friends and their wives, one night, when the girls brought a friend. An attractive young woman named Jessie. “I wouldn’t say it was love at first sight,” Jack says, “When we knew we wanted to get married, we were careful. This was during World War II, and many soldiers were not sure how long they would be stationed in one place or even if they would return from war.” There was a lot of uncertainty during war time.” Jack and Jessie got married in 1944, and moved to Kansas City as soon as Jack was discharged from the service. Jack’s stepfather, Dick, secured him a job on a bridge crew with the Union Pacific Railroad. “Miss Jessie”, as Jack loving referred to his bride, didn’t care for the railroad job that took him away from home for weeks at a time. Jack decided it was better to change jobs and went to work for Western Electric where he installed automatic dial equipment and eventually, Southwestern Bell, where he stayed until retirement. His first daughter, Thala, was born in 1949, and lives in Oklahoma City. A second daughter, Shelley, was born in 1954. Jack moved to McCrite Plaza four years ago. Even though both daughters now live out of state, they make sure one of them visits their dad at least once a month.in his third floor apartment in our assisted living section. Shelley, his youngest daughter, lives in South Carolina and spends seven to ten days with her dad at a time. “I’ve had women telling me what to do all my life” Jack, jokes. 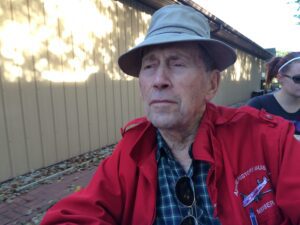 Thala and Shelley decided to move Jack to McCrite Plaza’s memory care neighborhood after he was diagnosed with dementia last year. “The memory care will be extremely important to us,” the sisters say. “Dad tends to stay in his chair during the day. Getting him out of the room will be helpful.” Thala and Shelley having been patiently awaiting the grand opening of our new memory care unit in the skilled nursing and rehabilitation building. The new building is located at 1301 NW Tullison Rd, on the same McCrite campus where Jack Morgan lives now. Our skilled nursing facility offers a full spectrum of care ranging from rehabilitation to long term care. Each level of care is designed to meet the specific needs of the resident. Our admissions coordinator, Chelsea Brittain, will be helping families make a smooth transition and can be reached at (816) 888-7930.
We are so pleased our McCrite Plaza Campus is designed to meet the specific needs of Jack Morgan and his family. Each level of care, independent living, assisted living and memory care, has accommodated Jack’s needs and provided an easy transition through each stage of his health journey.